In the 30's of the twentieth century, Western Union has become the world's largest telegraph company. The Western Union Company is a leader in global payment services 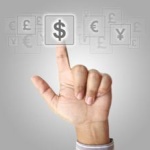