In 1849, Selden and Sibley, the founders of the future Western Union, created the New York State Printing Telegraph Company. Western Union for more than 130 years provides money transfer services to its customers. In October 1871 the company Western Union began to provide money transfer services, drawing on its own extensive telegraph network. In the 30's of the twentieth century, Western Union has become the world's largest telegraph company. The project of congressmen involved the construction of lines with the length of two thousand miles in 10 years. Western Union handled the government task within 112 days. The secret of Sibley was simple: he used the tactics of the "Western Union". On the market was placed about 765 million of ordinary shares of the company. On the first day trading on the exchange the company's shares rose by 3.3% and the cost was $ 19.96. Before transition to remittances Western Union company rendered services on sphere of cable communication. 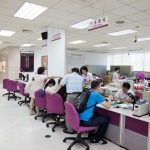